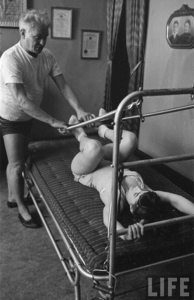 Pilates didn’t create the method just for women who wanted longer legs, flat abs, and pretty arms in sleeveless dresses. The inception of Contrology came with a need to improve the health ailments he had as child, like asthma, rickets, and rheumatic fever. He studied up on human anatomy and spent hours pumping iron, wrestling (which cost him an eye!), and zenning it up on the yoga mat. The result was not just a healthy immune system, but a bod that got him hired as an anatomy chart and Greek god statue model as a young man.

The Reformer and magic circle we use in Pilates class today are the offspring of hospital odds and ends. While serving as a nurse-physiotherapist in a German internment camp during WWI, Pilates felt injured soldiers would heal faster if they weren’t stuck in bed. With a serious lack of luxe fitness centers, Pilates got creative by attaching mattress springs to bed-posts and even repurposing old beer-keg hoops for the first magic circle, so says fitness legend. It’s also said that his funny-looking contraptions worked, as not one of his patients got sick during the 1918 Influenza. (This photo was taken years later in the ’50s.)

Want to join the discussion?
Feel free to contribute!